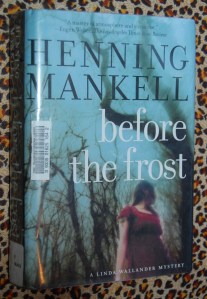 I read this book like my youngest daughter enjoys an unexpected treat – savoring each bit with delight and gratitude, proceeding ever more slowly and with a growing regret that the experience will soon end.
The first Linda Wallander Mystery, (and Mankell’s tenth novel featuring Inspector Kurt Wallander) ‘Before the Frost’ joins Linda as she endures the waiting period required before she may begin her career at the same police station as her father. In forced stasis, she kills time, hangs out with her girlfriends and quarrels with her father… all quite boring, until her friend Anna disappears.
Since no one else believes it atypical of Anna to have vanished, Linda investigates the disappearance on her own. Linda’s concern, inexperience and persistence generate a few rookie mistakes, placing her in danger—and exposing a connection between her investigation and her father’s current case. When another of Linda’s friends disappears, father and daughter join forces, racing against time to stop a tragedy, the seeds of which were planted decades before.
I recommend this book to those who enjoy crime novels. The plot is intricate without fussiness, there is enough police procedure and not so much that one becomes mired in red tape, and Mankell’s characters are incredibly compelling.
Henning Mankell has written over thirty-five novels and many plays. Published in thirty-five countries, he consistently tops Europe’s bestseller lists. His work has been adapted for numerous television and film productions. He also won the German Book Prize and the Crime Writers’ Association’s Macallan Gold Dagger.